The Great Polish Map of Scotland 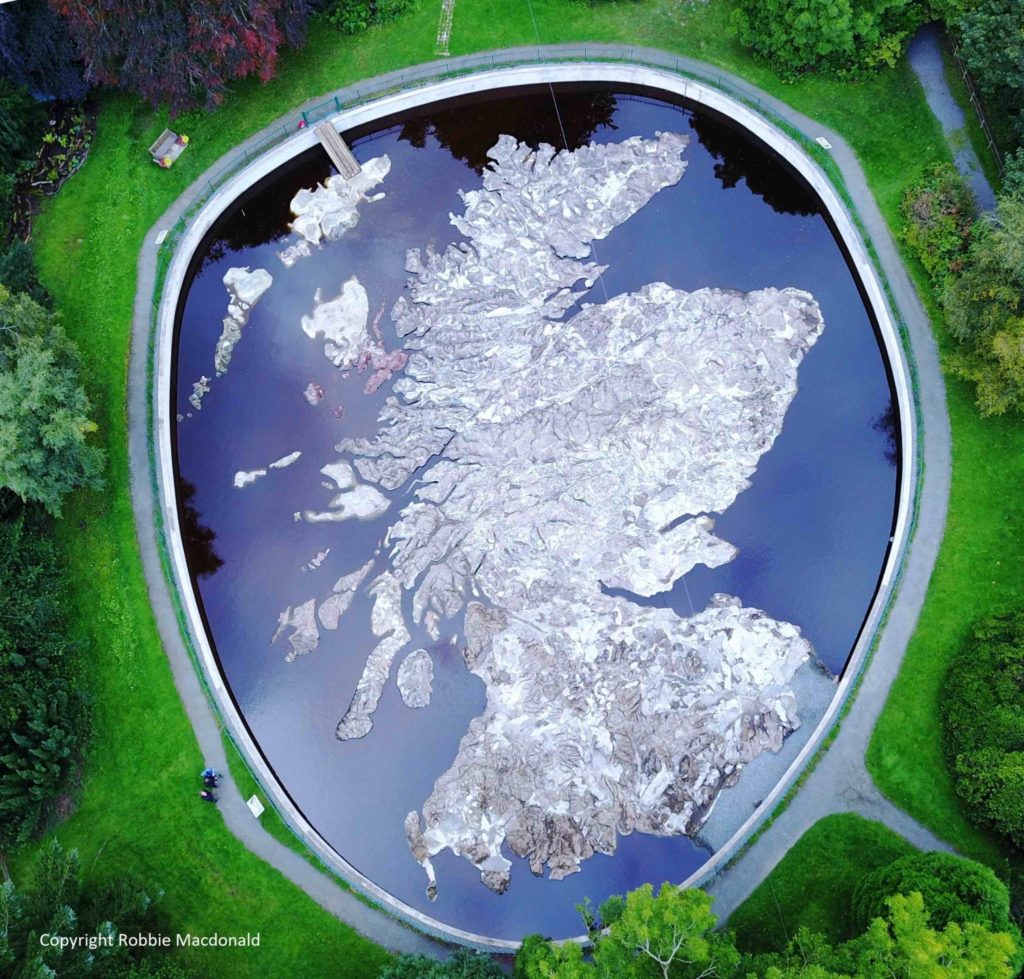 The Great Polish Map of Scotland is a large (50 m x 40 m) three-dimensional, outdoor concrete scale model of Scotland. It is also known as the Mapa Scotland (derived from Polish mapa Szkocji) or the Barony Map.

The brainchild of Polish war veteran Jan Tomasik, it was built between 1974 and 1979 and is claimed to be the world’s largest terrain relief model.

The sculpture is a category B listed building and is being restored by Mapa Scotland.

The Great Polish Map of Scotland is a unique feature in the Scottish landscape. It is a large physical relief map of Scotland, sculpted in concrete and measuring some 40m by 50m. It stands in the grounds of Barony Castle, Eddleston, once the home of the Murrays of Elibank, and later the Hotel Black Barony. But how did this remarkable artefact come into existence…?

“The Great Polish Map of Scotland” was built over six summers between 1974 and 1979. It was mainly the work of a small group of Poles.

They were assisted by staff from the Hotel Black Barony (Barony Castle) and Polish exchange students visiting Britain.

The map was the brainchild of Krakow-born Jan Tomasik (pron. Tomaashik), a sergeant in the 1st (Polish) Armoured Division, who had been stationed in Galashiels and had married a Scottish nurse in 1942 after being treated in the town’s Peel Hospital for the effects of a wound.

He became a successful hotelier in Edinburgh after the war and added Black Barony to his properties in 1968.

The Great Polish Map of Scotland measures some 50 metres by 40 metres and lies in an oval pit surrounded by a 142 metres long perimeter wall. Covering an area of 1590 square metres, it is understood to be the largest three-dimensional physical representation of a country and the largest outdoor relief map in the world

In 1981 deterioration of the surface paint caused by weathering was tackled in an general attempt to refresh the map. The existing paint was stripped and the whole map repainted. A hotel fire in the same year and the pressing need to renovate the damaged interior diverted attention and efforts away from the map.

After the hotel closed in 1985 and ownership of Barony Castle passed from the Tomasik family, the map fell gradually into neglect and disrepair caused mainly by frost damage. It became heavily overgrown and almost hidden from sight.

On a later visit to Scotland in 1994 Professor Trafas, as he now was, happened to mention the map while attending a European Union sponsored meeting of town planners from Edinburgh and Krakow. Its “rediscovery” led eventually, in 2010, to the formation of Mapa Scotland, a group of volunteers dedicated to saving it from further decay and restoring it to its former condition.

In August 2010 the initial clean-up started. Category B-listed status was secured for the map in 2012. In September of the same year it was the subject of a debate in the Scottish Parliament sponsored by Christine Grahame MSP

In 2013, while the search for funding continued, work began on clearing loose rubble and weeds from the map in advance of restoration, and tests were carried out successfully to reconnect the old gravity-driven water supply.

In the same year Mapa Scotland acquired charitable status. Its main aim in restoring the map is to ensure that it becomes a permanent feature in the Borders landscape and an educational resource and visitor attraction for future generations to admire and enjoy. The map’s construction and now its restoration have linked Scots and Poles for almost three generations.

Also in this section

We use cookies to ensure that we give you the best experience on our website. If you continue to use this site we will assume that you are happy with it.OKRead more